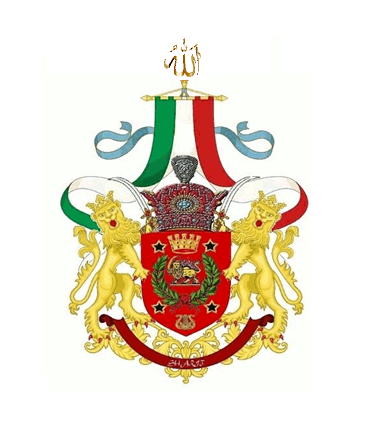 
The Sharif family imperial insignia is a design which has numerous elements to it which each symbolizes a specific matter.

The blessed noble word of Allah (swt) adorns the top to demonstrate the almighty's rule over everything.

The design features prominently the Pahlavi crown and symbolizes the ties to the Pahlavi dynasty.

The main colors in use are red & gold on the shield which are royal in nature. Adorning the design are the Red, White and Blue (Colors of America) and Red, White & Green (Colors of Persia).

The two outward looking crowned lions are western in design, although crowned lions are mostly a Christian symbol they are used in this design to represent the western ties of the Sharif family and signifies the lion of Judah guarding the Sharif family. They are holding swords (the word of God) which closely resembles the Persian motifs of Lions upholding swords albeit done with a western twist.

There is a castle on top of the shield symbolizing strength, it closely resembles a crown when looked at from a distance which is to complement the lion and sun design below it.

The lion and sun design are an ancient Persian historical design and symbolizes might, victory & success. The lion represents royalty while the sword represents the word of God, the Sun also symbolizes light and royal splendor.

There are four golden five pointed stars which are symbols of America.

The laurel wreath is also featured around the lion and sun motif, this is an ancient design which has been used extensively in Royal Persian history. The laurel wreath is the first crown is use through-out history (based on the Roman crown used by the Caesars), it symbolizes victory and royalty.

Under the above design is the Lyre symbolizing the Sharif families musical legacy and dedication to music. As an attribute of Apollo, the god of prophecy and music, the lyre to the ancient Greeks symbolized wisdom and moderation.

Harmony, Lyres are also believed to symbolize cosmic harmony. Apollo always carried his lyre with him, and it's not just because he had the talent for it. Like in the story of how Hermes offered a lyre as a peace offering to him, this instrument became a powerful instrument of heavenly peace and social order.

Under the entire design is a red banner with the words SHARIF inscribed on it, Sharif means noble and is displayed here to represent the family name and intentions of remaining true to the noble cause.